The Moray Firth is Scotlands largest firth. Situated on the North East coast of Scotland, it stretches from Duncansby Head in the North to Fraserburgh in the East, covering more than 800 kilometres of coastline, broken by windswept cliffs and rocky shores, broad sandy bays and long sheltered inner firths.

The Moray Firth is not only a place of natural beauty, it is also rich in history and culture and home to a number of important industries. Inverness, in the inner Moray Firth, is thought to be the second fastest growing city in Europe and is a good base for exploring the rest of the area. 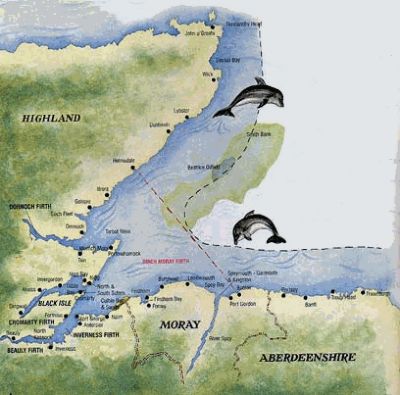 A large part of the inner Moray Firth, west of a line from Helmsdale to Lossiemouth has been recognised as being of European importance due to the presence of the resident bottlenose dolphins.  Bottlenose dolphins are considered rare in an European context. They are listed under Annex II of the EC Habitats Directive (92/43/EEC) as a species whose conservation requires the designation of Special Areas of Conservation. Because the Moray Firth dolphin population is relatively small, isolated and vulnerable, and because it is rare in a European context, part of the Moray Firth has been designated as a marine Special Area of Conservation (SAC).